Call us for a Quote 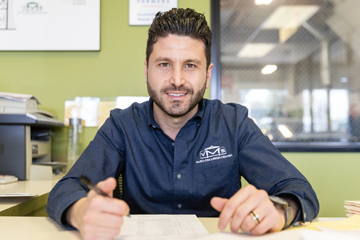 VMS Auto Collision Center Covina, the shop his father and uncle founded in Covina, California was stagnant back in 1989. Actually, he says, "stagnant" may be a little too nice of a description.

"We were at a point where I was telling them they need to either reinvest in the company, or we would have to divest and cut our losses," says Kebabjian, the shop's chief operations officer.

The shop had always operated out of the same 3,200-square-foot facility. When the economy slumped in 2009, an adjacent building next door had opened up. Purchasing the lot would allow VMS to expand dramatically and open itself up to whole new business opportunities.

Kebabjian's father and uncle were skeptical, until Kebabjian made his full-on sales pitch.

Kebabjian, 27, outlined his plan for the purchase in a detailed and thorough report, chock-full of financial analysis, forecasted sales, business environment evaluations, and every other minute detail. It not only convinced his elder owners, but allowed them to obtain the financial backing needed for the project.

"We were able to jump on that project, and our business has since taken off," he says, noting VMS's new facility measures 8,000 feet and revenues are steadily, if not rapidly, increasing. Kebabjian says, he owes the results of the situation to his education. It was in obtaining his bachelor's and master's degrees in business that Kebabjian learned to develop a business implementation plan, and it was in school he learned many of the valuable skills which have helped him lead a successful business for the past four years.

For Shreve, the collision center director for George Waikem Ford in Massillon, Ohio, states one of the biggest advantages of pursuing his degrees was it forced him to get out of his comfort zone, he reveals. You're forced to take certain courses in other areas of interest, and you're put in positions to work with others where you have little to nothing in common. "Working like that can really broaden your perspective on how to look at things," Shreve articulates.

The Shop Lesson: The answer to a problem in your shop is rarely straight forward, says Shreve. Be open to finding solutions in places you didn't think to look. Ask opinions of staff and customers. Borrow ideas from other industries or businesses.

"It's really just about having an open mind to doing things in a different way," Shreve states. "You can't be set in stone with the way you view things."

2. Structure is a Necessity. Time management, organization skills and learning to prioritize tasks are crucial in achieving a degree, Kebabjian says. While they're skills that can be learned on the job, they're much more force-fed in the academic atmosphere—especially when completing the degree while working full time in the shop, like Kebabjian did.

It's not just about having structure in your business, Shreve declares. It's about understanding how and why that structure produces the results it does.

"The goal needs to be to where you can have the shop organized in a way that allows for predictable results," he says. "You need to understand how each area is going to affect another in order to have it work smoothly together."

It's a pet peeve of Shreve's, and it's something he wishes could be completely eradicated from both the educational system and from professional industries - labeling people, and then treating them according to that label.

"I remember going through grade school and high school, and I could get OK grades without really putting in the effort. That made teachers think I was some sort of trouble maker," Shreve states. "You get that label, and no one really gives you the chance. That's one of the reasons I went into this industry. Later, when I went back to school and started going through college and getting a master's and a doctorate, I realized I could do it; I just needed the right motivation and the right people to lead me in that direction."

The Shop Lesson: Shreve jokes that his shop is like the "Island of Misfit Toys." "Pretty much every employee in my shop was labeled a 'trouble-maker' at some point in their careers," he discloses. "One of my painters is a big biker guy, and at his old jobs, people were scared of him. Well, you know what? He was here from 6 a.m. until 10 p.m. yesterday working his tail off.

"Some people just need to be shown that you care about them and have their best interests in mind. You can't be a screamer and run a body shop. People won't work for you, and you won't succeed."

Find what motivates employees, Shreve says, and help them to achieve their goals.

At times, there aren't too many things as thankless as going back to school, Shreve says. Sure, you're gaining knowledge, you're building a foundation that will hopefully lead to eventual success. But, while going through it, school can feel like one constant stream of judgment, critiques and evaluations—with only a piece of paper to reward you at the end.

The Shop Lesson: Bottom line, you have to reward your staff for the work they do, Shreve states emphatically. "Your staff can have the same type of feeling if you're not regularly showing them you appreciate the effort they put in," he says.

Shops should reward staff in the ways that best suit the business, whether it's through monetary rewards, vacation days, prizes, awards, or simply regular pats on the back. "You can't lead them if they don't feel appreciated," Shreve says.

In an MBA program, it's called the capstone course. This, Kebabjian claims, was the most valuable class he took. Essentially, a capstone class combines all the course work a student has done throughout the program and wraps it up into one final project—often revolving around creating a thorough business plan.

"What it teaches you," Kebabjian elaborates, "is to be able to apply concepts to any situation, to take all the information you have and tools you have and apply them to a situation." The

Shop Lesson: This is where Kebabjian's plan for shop expansion comes in. Such an undertaking was a large risk for his family's business. Had he been wrong about the switch to a much larger facility, it could've crippled the shop, possibly leading to it closing.

"That's why decisions in your shop need to be planned out thoroughly," he says. "I needed to look at it from every angle and know what we could expect from the switch."

From doing the legwork, Kebabjian knew exactly how many customers he needed to make the switch profitable, and he developed direct approaches for gaining those customers. He understood the equipment and staffing needs. He outlined how and where the funding would come from; how it would be paid off.

"And not every plan works perfectly," he continues, "but when you're thoroughly prepared, it's much easier to react to situations that come up."

More posts from author
Saturday, 29 January 2022 VMS AUTO COLLISION CENTER ACHIEVES GOLD CLASS® STATUS!
Monday, 03 February 2020 Why You Should Never Ignore the Damage on Your Vehicle
Thursday, 02 January 2020 After the dust from your collision has settled..

No comments made yet. Be the first to submit a comment

At VMS Auto Collision Center, our goal is to provide high-quality automotive repair services to all our clients. We promise to return your vehicle to its pristine condition and to offer fast and high-quality services that prioritize your needs and preferences

We are OPEN and here to help you!